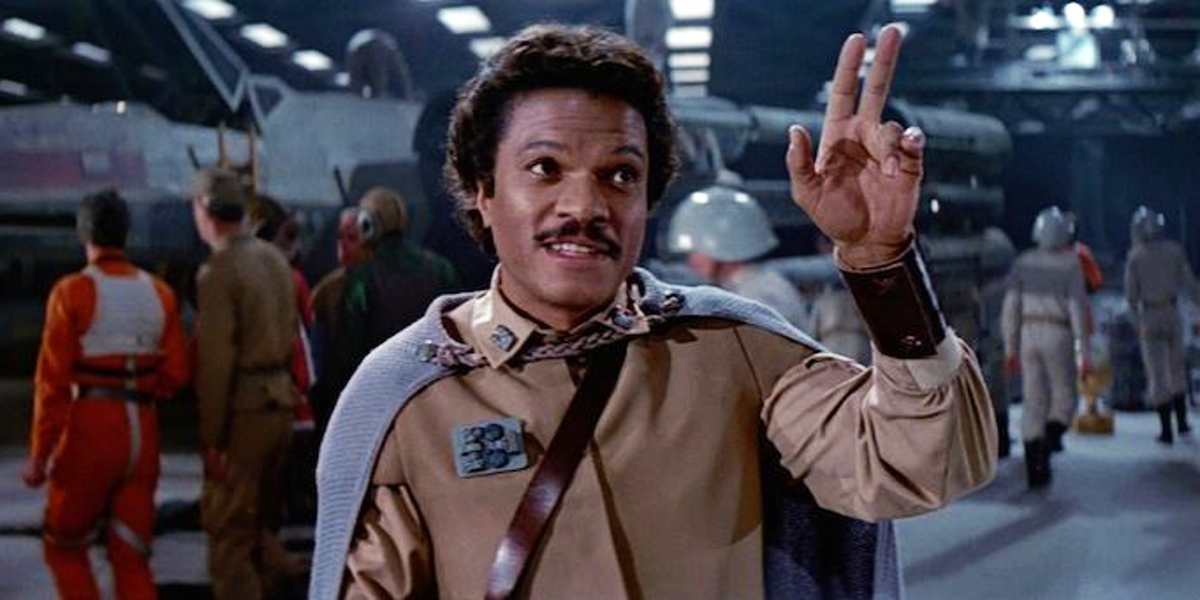 We all know Star Wars‘ Lando Calrissian as a suave rogue with an enormous amount of charm and charisma. He’s been a smuggler, gambler and card sharp, and generally acts out of his own self interest, though he did end up fighting for the rebels.

But there’s one part of his backstory that was once very different. Lando was originally going to be a clone.

After the enormous success of A New Hope, Lucas was burnt out. He was also dealing with building Lucasfilm and figuring out how he was going to finance the sequel himself to stop Fox interfering. So, he decided to ask author Leigh Brackett, known as the Queen of Space Opera, to write the sequel.

She was an experienced screenwriter and had worked on films like The Big Sleep and Rio Bravo. In a story conference with Brackett in 1977, Lucas outlined his initial ideas for Star Wars II.

It was at this point that he brought up a new character: an old friend of Han who is a slick, charming con man, and a little like James Bond. Lucas went to great lengths to describe how Lando could be a clone.

“Someone who could look human but not really be human. He’s possibly a clone… a Rudolph Valentino character…[who’s] almost too perfect looking. We assume that in the cloning process, they manipulated genes and improved on the original.”

Lando isn’t just any clone, though. His clan is one of the ruling classes in a world where there are planets of clones with around 700 countries. This wasn’t even Lucas’ most shocking idea: he wanted to establish that Lando’s “clan were slightly weird in their own way… and were partly responsible for the [Clone] War[s]”.

This was a different version of the Clone Wars we know. In Attack of the Clones, the war is established as a battle between the Galactic Republic and the Separatists. The clones are nothing more than a weapon used by the Republic against the Separatists’ battle droids.

Lucas also considered making Leia distrust Lando because he is a clone and even refer to him in a disdainful manner. We can only guess that this could be because of an instinctive dislike of someone who seems human but isn’t.

But it could also be linked to the fact that certain clones had some involvement in the start of the war. His initial plan was to establish Lando as a clone and then show him coming across his clan in a later film.

Brackett developed Lucas’ initial ideas about Lando as a clone, and made a few of her own changes. In her script, most of Lando’s clan have been killed in the Clone Wars. So Lucas’ idea that he could meet up with clones like him, later on, was dropped.

Lando is first mentioned in Brackett’s script when Han and Leia are fleeing from the Imperial fleet and need a safe refuge. Han thinks they can find it with his old friend. He tells Leia that Lando’s family were refugees from the Clone Wars. Lando now lives on Hoth and has become a surrogate son of Chief Bahiri, the leader of the native population.

We can see many of Lucas’ ideas in the story. Lando is described as “so handsome that, like Rudolph Valentino, he seems not quite real” and Leia is immediately suspicious of him because he is a clone.

Brackett then goes further. She shows that Leia’s distrust increases after C-3PO is damaged and Lando states that the workshops can only repair him in a week. Lando senses Leia’s wariness. He realizes that she’s always watching him. So he explains his backstory: he is a clone from the noble Ashardi family.

“My great-grandfather wanted many sons and he produced them from the cells of his own body. His sister, a remarkable woman, produced many daughters by the same means. Thus we keep the blood pure.”

Lucas did, of course, create Jango Fett later on and used the idea of one man producing hundreds of clones in a very different way.

In Brackett’s script, few of Lando’s clan survive the Clone Wars, despite their numbers. Those who do, try to stay under the radar. This could tie into Lucas’ idea that Lando’s clan were partly responsible for the war. In one of the most moving parts of the story, Lando expresses how lonely he is now that all the faces on the street aren’t the same as his own.

“It didn’t seem strange to us to see our own faces endlessly repeated in the streets of our cities. It gave us a sense of oneness, of belonging. Now, when every face is new and different… I feel truly alone.”

But seconds after this speech, Lando betrays Han and Leia to Darth Vader. His surrogate father, Bahiri, tries to talk to his son about the things he’s doing and ends up dying in a confrontation with Vader’s troops. Lando is completely devastated. Once more, he’s lost someone he loves. Lando switches sides and joins the rebels.

Brackett died of cancer soon after she sent Lucas a first draft. He thought it strayed too far from his initial ideas. Lucas ended up writing the next draft himself and then hired screenwriter Lawrence Kasdan. This meant that Lucas dropped some of his earlier plans.

If Brackett had the chance to write further drafts, we may have had Lando as a clone in the first sequel to Star Wars, and who knows what that would have meant for Donald Glover’s fabulous portrayal in Solo, or Billy Dee Williams reprising the role in The Rise of Skywalker?

This content is created and maintained by a third party, and imported onto this page to help users provide their email addresses. You may be able to find more information about this and similar content at piano.io