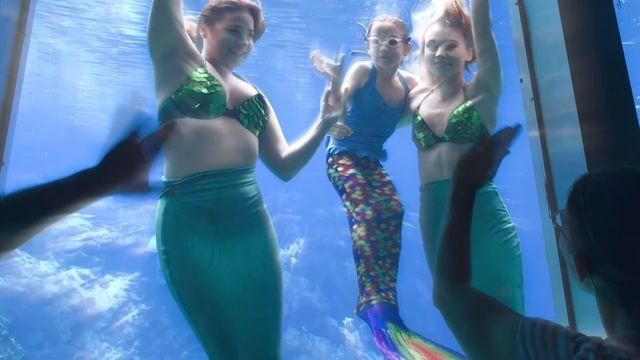 A six-year-old little girl from Ohio had her dream come true: To swim with mermaids. Beatrix Paulus has a rare condition that has left her critically ill. Thanks to the Make-A-Wish Foundation, Beatrix was able to fly to Florida to join the Weeki Wachee Springs mermaids in the water.

A 6-year-old girl’s dream to swim with mermaids came true on Tuesday after she was flown from her home in Ohio to Florida, where she was able to join the Weeki Wachee Springs mermaids in the water. Beatrix Paulus, whose rare condition causes tumors throughout her body and has left her critically ill, was able to slip on a “tail” of her own and head “under the sea” with her fellow mermaids.

“It’s been really amazing,” Ben Paulus, Beatrix’s dad, told WFLA. “Definitely a highlight is just watching Bea get in with the mermaids and swim with them and actually go underwater. We weren’t sure if she would do it, but she’s been so brave this whole year and it’s amazing to see how brave she’s been again here.”

Beatrix, who was diagnosed with Langerhans cell histiocytosis, was granted her wish through the Make-A-Wish Foundation. Langerhans cell histiocytosis is a disorder that causes immune system cells to build up in the body, which results in tumors. According to the U.S. National Library of Medicine, the condition may affect the pituitary gland, and can also impact the lungs and liver possibly leading to life-threatening circumstances.

Paulus said his daughter will be talking about her swim with mermaids for weeks to come.

“Dream come true, for sure,” he told WFLA.