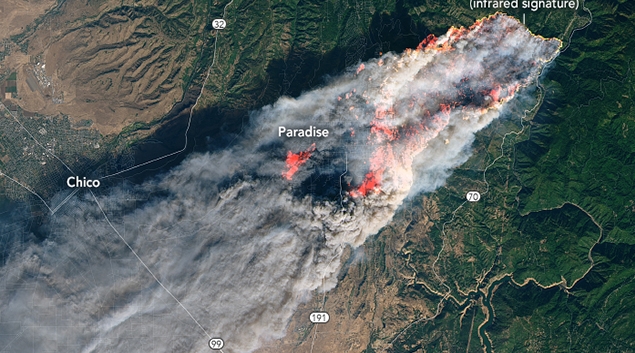 A trio of wildfires has devoured tens of thousands of acres and numerous structures in Northern California, killing five people and destroying Adventist Health Feather River Hospital in the town of Paradise. Both the hospital and the town have been leveled by the Camp Fire, one of three currently ripping through Northern California, according to news reports. Butte County Sheriff’s Deputies helped evacuate patients as the roof burned, according to CBS San Francisco.

A hospital spokesperson told the news outlet that all patients were safely evacuated but the hospital was completely destroyed. Numerous towns are under mandatory evacuation orders, at times creating gridlock on main arteries that lead in and out of the impact zone. Area hospitals like Enloe Medical Center received some of the Adventist patients. The Camp Fire is said to be spreading at the rate of 80 football fields a minute, reports said. More than 150,000 people have been evacuated as a result of the fires.

Last year, a trio of deadly fires converged to create a virtual monster fire that came close to destroying Sutter Health Santa Rosa Hospital. Luckily the facility survived, though patients were evacuated to other system facilities. While wildfires are a familiar foe to residents in the West, the last two years have brought some of the most devastating blazes in history.

“We’ve got six major fires burning but the three are critical: the Camp Fire in Butte County, and the two in Ventura County: the Hill Fire and the Woolsey Fire,” Cal Fire Director Ken Pimlott said in a press conference on Friday.

“We know there are fatalities but we really can’t put a number on it quite yet,” said Mark Ghilarducci, director of California Governor’s Office of Emergency Services, in a news conference Friday.