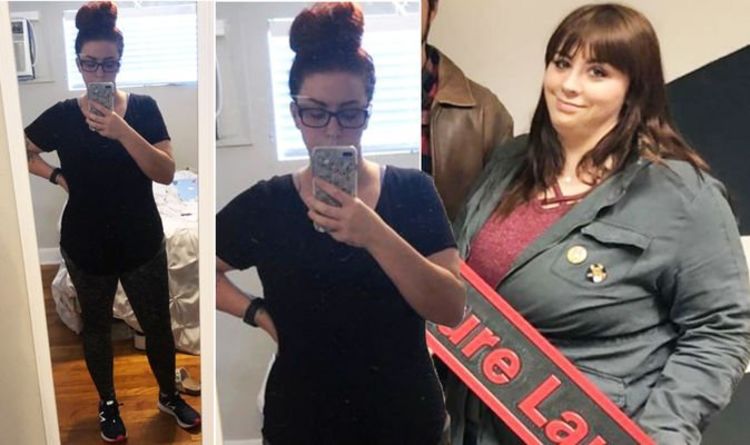 When slimming down, people can look to others to get inspiration on what diets might work for them. Recently, one woman had an astounding weight loss transformation when she slimmed from 17st 5lb to a much healthier 13st. Opening up on Reddit, the user “disclaimer_necessary” posted pictures of herself before and after losing weight and explained what she changed in her diet. The slimmer used a keto diet plan as well as intermittent fasting in order to get her new smaller frame.

Posting online, the slimmer shared she was 28-years-old and 5ft 5in and managed to lose the weight in just seven months.

She revealed her weight loss was due to a combination of things, including the keto diet and the form of intermittent fasting, OMAD, or One Meal A Day.

Those who follow the keto diet plan will restrict the amount of carbs they eat to around 25 grams of net carbs a day.

When on this diet, the Reddit user is likely to have eaten foods such as meats, fish, eggs and vegetables and stayed away from high-carb products including bread, rice, pasta and sugary treats.

While on this diet, the body is thought to go into a state called ketosis, which helps it start to burn more fat.

People following a keto diet plan will also eat foods high in fat and with a moderate protein content.

The slimmer,” disclaimer_necessary” explained she paired keto with OMAD, which is a form of intermittent fasting.

Those who follow an intermittent fasting plan will limit what to eat to certain times of the day and fast for the remaining hours.

On the OMAD diet plan, slimmers will eat just one meal a day and fast for the remaining 23 hours.

For this meal, dieters are able to eat whatever they want, although the Reddit user is likely to have stuck to foods on the keto diet plan.

This is thought to lower the appetite while still slimmers feast for one meal every day.

During the fasting period, people trying this out as still allowed to drink water and have unsweetened coffee and tea.

When following an intermittent diet plan, others will opt for the 16:8 version, which allows them to eat within an eight hour window each day.

Others will use the 5:2 plan where they must limit their calorie consumption to just 500 calories on two days of the week, and eat whatever they want on the remaining five days.

By restricting themselves two days a week, this is thought to help slimmers make healthier choices on the remaining days.