‘They killed her’: Husband demands answers after his wife, 34, died of a treatable asthma attack outside locked ER doors

Laura Levis died at 34 of a treatable asthma at the doors of a Massachusetts emergency room, according to a heart-wrenching story penned by her husband, Peter Demarco, in Globe Magazine.

DeMarco previously published an open letter to the staff of CHA Somerville Hospital, thanking them for treating his wife and her family with dignity.

But that was before he knew the whole story.

Before knew that Laura had called 911.

Before he knew she had walked to the hospital.

Before he knew Laura had made it within feet of the door to the ER.

Now, his gratitude has turned to horror and rage at the series of simple but catastrophic failures that led to his wife’s death just outside the hospital. 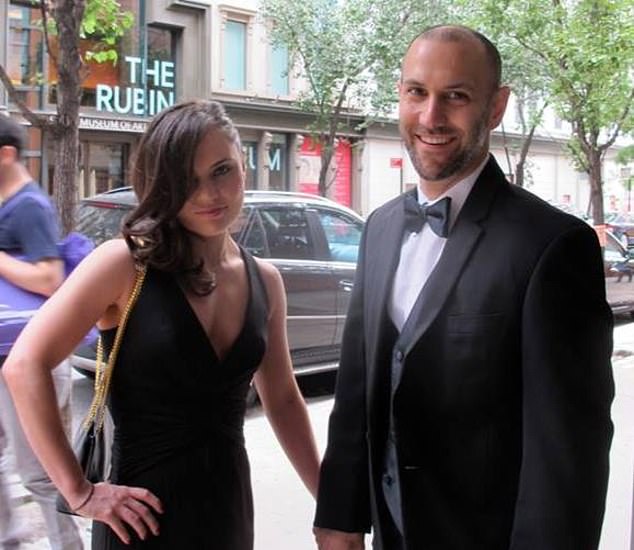 Laura Levis (left) died at 34 of cardiac arrest after an asthma attack just outside the door to a Massachusetts hospital. After learning of the failures of hospital staff and 911 dispatchers, her husband, Peter DeMarco (right) penned the horrifying story of her death in Globe Magazine

Every year, around 3,500 people die of asthma attacks. Most of them don’t have much in common with Laura.

Nearly half of people who die of asthma are over 65.

Laura was young, and impeccably fit.

Every year, hospital mistakes kill more than 250,000 Americans, according to a recent estimate from Johns Hopkins University.

We don’t have a clear count for how many people died waiting for an ambulance, or because 911 operators didn’t do their jobs well enough, but even emergency responders themselves have said, anecdotally, that the problem is worsening.

We do know that one death was the result of all of these failures combined.

Levis had long had asthma. She was accustomed to dealing with the occasional attack. But on September 16, 2016, it became clear to Levis that the attack was not going to simply subside. 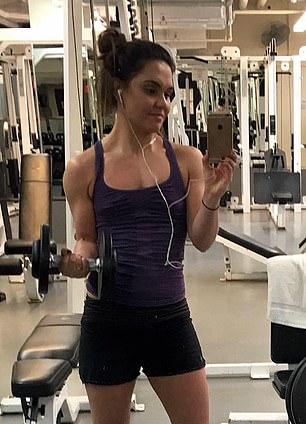 Despite her asthma, Laura incredibly fit, lifting and running competitively

What seemed like a convenience would prove one of the crucial facts of Levis’s death.

She was staying just a short walk downhill from the hospital. So when it was becoming increasingly difficult to breath, sometime just after 4am, Levis started walking toward the CHA Somerville.

Levis was tough, by her husband’s vivid account. She was 5ft 2in, but could bench press more than her own body weight, ran and lifted weights competitively.

Surveillance cameras outside the hospital show that Levis stopped in the hospital’s driveway, debating which of the two entrances looked most likely to lead to the emergency department.

She tried one, but the sliding glass door didn’t move when she stood in front of it and peered in.

So Levis started to make her way to the second entrance. She almost made it. Just 29 feet from the second door, she sat down on a bench.

‘I’m at Somerville Hospital. I’m having an asthma attack. I’m dying,’ she told the voice on the other line.

She was speaking to a regional dispatcher, who tried to clarify her location, then called the local Somerville police station.

The two dispatchers went back and forth over Laura, who could hardly talk by then.

Emergency responders use pings from cell towers to triangulate a person’s position. 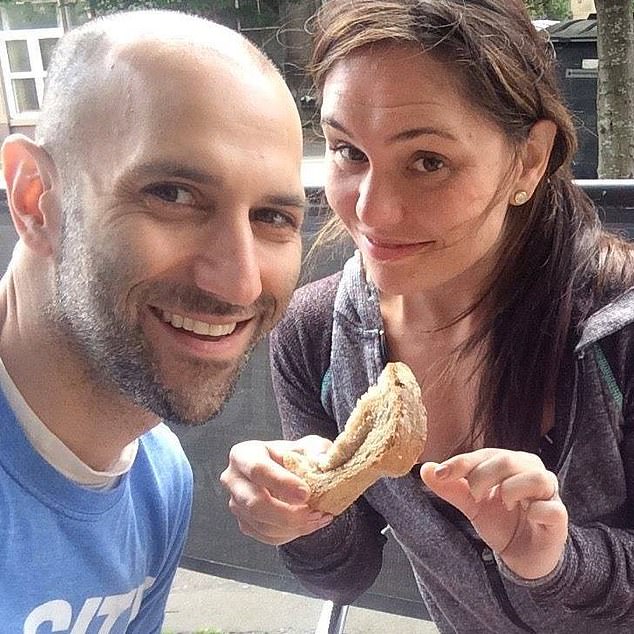 DeMarco and Levis were living separately when she died. He didn’t know that his wife had tried to call 911 and waited 10 minutes for help until after she had been taken off life support

That ability has undoubtedly saved countless lives as it is certainly more precise than relying on the descriptions of surroundings given by people mid-emergency.

But the technology is far outdated. With the GPS coded into app running in the background of your smart phone, you can order take out to a more precise location than 911 responders can pinpoint your call to.

The pings to Levis’s phone suggested she had either collapsed on the street near the far right corner of the hospital, or that she was at the opposite corner behind the hospital.

So when CHA Somerville told DeMarco that his wife of two years had been in the last place they looked after being contacted by 911, it could have been true, if they had gone first to those two GPS locations.

Or, it could have been an over-statement, a poorly-chosen cliche.

Or, because she had lost consciousness, on a bench just outside that second hospital entrance, it could have been a bold-faced lie.

‘In the 911 tape, you hear Laura’s voice again. “I’m outside,” she starts to say, before struggling to make another sound,’ DeMarco writes. 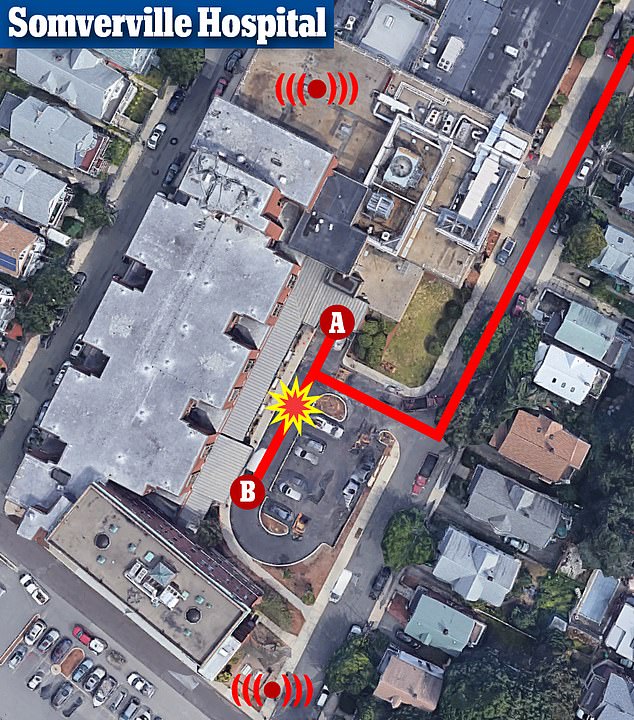 Dispatchers for 911 calls ask callers where their emergencies are and use cell towers to ping phones to try to get locations. Levis tried the one entrance (A) but it was locked. She nearly made it to the second (B), but collapsed on a bench (star). Pings to her cell phone (red) suggested she was much further, at one of two far corners of  the hospital’s grounds

Read More:  What to know about peeing after sex

As DeMarco explains, that’s when Levis’s ‘countdown’ began. Though there is no exact time limit for how long someone can be without oxygen, it starts to affect the brain around 10 minutes.

The dispatcher had called an ambulance, not realizing that if someone had run out of the hospital, they would have found Levis practically without looking.

DeMarco, a former Boston Globe journalist, tallied every second that was wasted with excruciating detail.

The pain of listening to each call recording, watching surveillance footage of the moments where his wife was almost saved in time – so many times – but then overlooked, again, is hard to imagine.

By the time she was finally found by firefighters, it was too late. The doctors didn’t know that for sure yet, DeMarco didn’t even know his wife had had an asthma attack and, based on her conversations with the 911 dispatcher, DeMarco writes that his wife’s final thoughts were likely that ‘help is on the way.’

The next morning, DeMarco got the call from Somerville that his wife had gone into cardiac arrest. DeMarco and Levis had been living separately for a few weeks, so he knew nothing of the asthma attack.

‘But now, I wonder, why did the emergency room wait 2½ hours after Laura was admitted to contact me? Was it merely a coincidence that I was called 15 minutes after the night-shift staff had left the building?’ he writes.

There was a chance that Levis might wake up if the swelling around her brain subsided and she hadn’t been without oxygen for too long.

So DeMarco waited for seven days with Levis before a doctor told him, Levis’s father and Demarco’s father that the woman they all loved was not going to wake up and it was time to let her go. 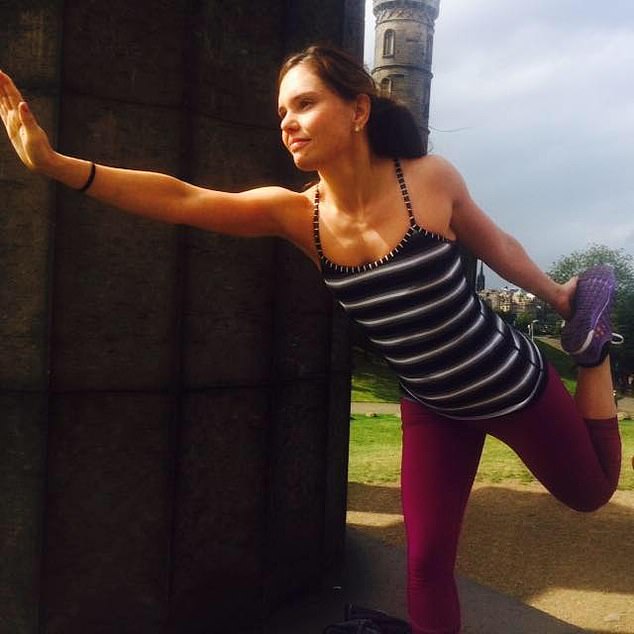 Levis lost consciousness and could not breath for 10 minutes. If any one of the litany of mistakes DeMarco details hadn’t been made, she might have regained consciousness

He even remembered the conduct of the doctor as admirable.

‘In a gesture of humility, [Dr Duncan] Kuhn sat on the floor, looking up at us as he told us Laura wasn’t coming back.’

Read More:  Spa of the week: The Lygon Arms, Cotswolds

No one mentioned where or when she’d be found, or the 911 call, or any of the failures that preceded Levis’s death.

DeMarco wrote a public thank you letter that was published in the New York Times.

Since then, Levis’s uncle followed his gut feeling, calling the local police station. This led him to the 911 call, and started the process of unravelling Levis’s death that DeMarco has since dived into her.

The uncle called Levis’s father, himself a doctor, who told DeMarco about the 911 call.

‘”Pete, I have the most terrible thing to tell you,” my father-in-law said. “They killed Laura,”‘ DeMarco recalls.

DeMarco attempted to sue the hospital for malpractice, and city and state officials did investigate Levis’s death.

The Department of Health and Human Services even investigated, and found CHA Somerville to be negligent. The government settled with the hospital for $ 90,000. 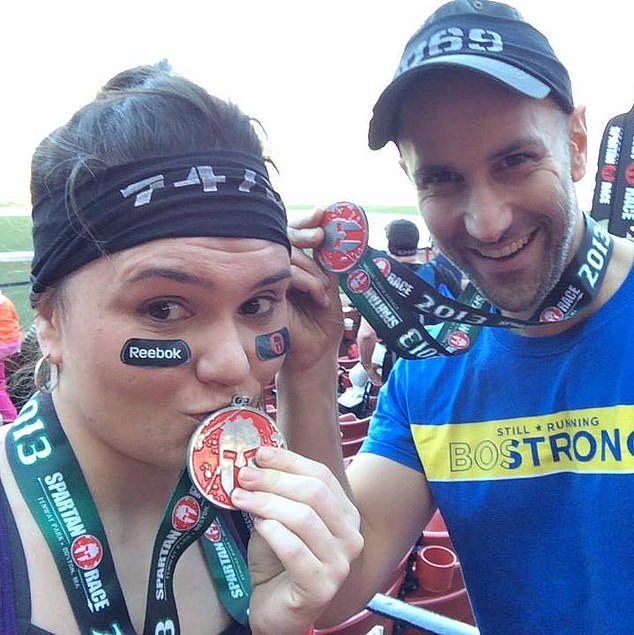 Levis was wearing a hoodie from the Spartan Race she and DeMarco had run together when she died. DeMarco, a former journalist, was first grateful to Somerville for treating her with dignity for the week she was in a coma, then furious when he learned of their negligence

But that was as much as the multi-million dollar company that owns that hospital could be liable for, thanks to a federal cap on how much a hospital that receives Medicare funding can be sued.

DeMarco is angry at that cap, and most of all he’s angry at a woman he refers to only as Nurse X. The early morning of Levis’s death, many posts in the hospital, like the security desk, were simply unmanned, so there’s on one to blame.

But, in his chilling words:  ‘On the surveillance video, you see Nurse X take one step outside the ambulance-access door, going no further than an arm’s reach from it.

‘In the predawn darkness, Nurse X cranes her neck a bit to see, but she doesn’t spot Laura on the bench, which is almost straight ahead of where she’s looking, albeit in a shadow.’

Watching the video, ‘Laura was just about 70 feet from her; you see them both in the same frame of the surveillance video, shot from overhead,’ DeMarco writes.

But several more minutes would pass and cost Laura her life.

Now, DeMarco is just beginning to heal. He writes that he spent a year avoiding the hospital before going to sit on the bench where his wife died, waiting, alone, for help.

A security guard came out to assist DeMarco. More than a year too late.

But, at least, he takes some small comfort in new signage that’s been put up around the hospital, clearly marking the entrances. And that someone was there.