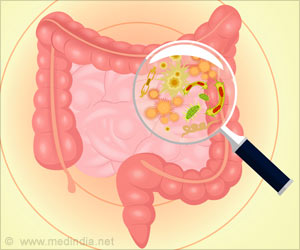 New study finds that gut bacteria may control movement in fruit flies and recognize the neurons involved in this response. The findings of the study are published in the journal Nature.

‘A new study finds that gut bacteria may help control movements in flies. Treatment with a gut bacterium slowed down the germ-free flies which were hyperactive speed walkers. Hence gut bacteria play a significant role in the mammalian movement.’

“This study provides additional evidence for a connection between the gut and the brain, and in particular outlines how gut bacteria may influence behavior, including movement,” said Margaret Sutherland, Ph.D., program director at NINDS.
Researchers led by Sarkis K. Mazmanian, Ph.D., professor of microbiology at the California Institute of Technology in Pasadena, and graduate student Catherine E. Schretter, observed that germ-free flies, which did not carry bacteria, were hyperactive. For instance, they walked faster, over greater distances, and took shorter rests than flies that had normal levels of microbes. Dr. Mazmanian and his team investigated ways in which gut bacteria may affect behavior in fruit flies.

“Locomotion is important for a number of activities such as mating and searching for food. It turns out that gut bacteria may be critical for fundamental behaviors in animals,” said Dr. Mazmanian.

Fruit flies carry between five and 20 different species of bacteria, and Dr. Mazmanian’s team treated the germ-free animals with individual strains of those microbes. When the flies received Lactobacillus brevis, their movements slowed down to normal speed. L. brevis was one of only two species of bacteria that restored normal behavior in the germ-free flies.

Dr. Mazmanian’s group also discovered that the molecule xylose isomerase (Xi), a protein that breaks down sugar and is found in L. brevis, may be critical to this process. Isolating the molecule and treating germ-free flies with it was sufficient to slow down the speed walkers.

Additional experiments showed that Xi might regulate movement by fine-tuning levels of certain carbohydrates, such as trehalose, which is the main sugar found in flies and is similar to mammalian glucose. Flies that were given Xi had lower levels of trehalose than did untreated germ-free flies. When Xi-treated flies, which showed normal behavior, were given trehalose alone, they resumed fast movements suggesting that the sugar was able to reverse the effects of Xi.

Next, the researchers looked into the flies’ nervous system to see what cells were involved in the bacteria-directed movement. When Dr. Mazmanian’s team turned on neurons that produce the chemical octopamine, that activation canceled out the effect of L. brevis on the germ-free flies. As a result, the flies, which had previously slowed down after receiving the bacterium or Xi, resumed their speedwalking behavior. Turning on octopamine-producing nerve cells in flies with normal levels of bacteria also caused them to move faster. However, activating neurons that produce other brain chemicals did not influence the flies’ movements.

According to Dr. Mazmanian, Schretter and their colleagues, Xi may be monitoring the flies’ metabolic state, including levels of nutrients, and then signaling to octopamine neurons whether they should turn on or off, resulting in changes in behavior.

Read More:  5 small changes to try that can help to alleviate anxiety

Instead of octopamine, mammals produce a comparable chemical called noradrenaline, which has been shown to control movement. “Gut bacteria may play a similar role in mammalian locomotion, and even in movement disorders such as Parkinson’s disease,” said Dr. Mazmanian.

More research is needed to see whether bacteria control movement in other species, including mammals. Also, future studies will further investigate how Xi is involved in these behaviors.