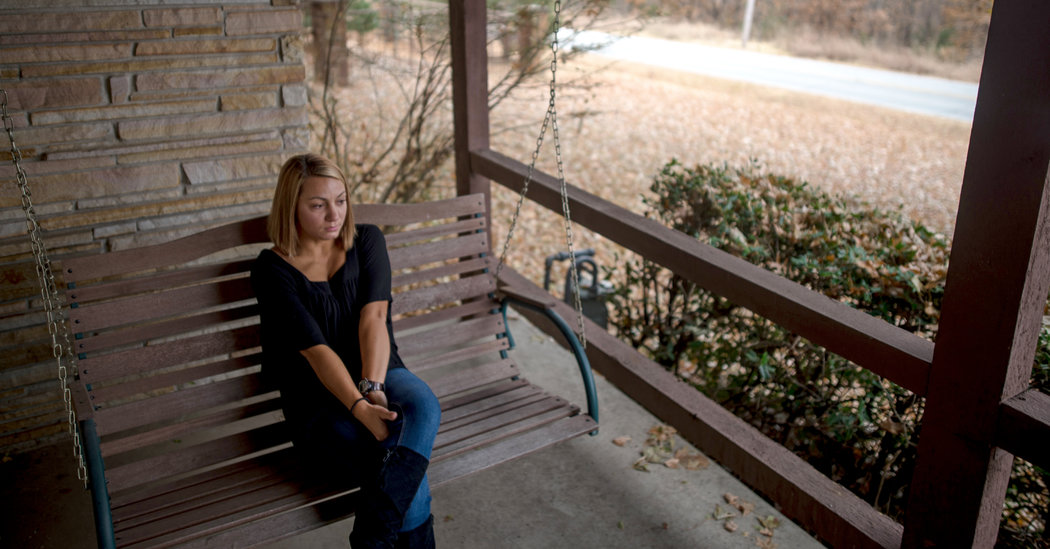 TULSA, Okla. — The teenager had pink cheeks from the cold and a matter-of-fact tone as she explained why she had started using methamphetamine after becoming homeless last year.

“Having nowhere to sleep, nothing to eat — that’s where meth comes into play,” said the girl, 17, who asked to be identified by her nickname, Rose. “Those things aren’t a problem if you’re using.”

She stopped two months ago, she said, after smoking so much meth over a 24-hour period that she hallucinated and nearly jumped off a bridge. Deaths associated with meth use are climbing here in Oklahoma and in many other states, an alarming trend for a nation battered by the opioid epidemic, and one that public health officials are struggling to fully explain.

The meth problem has sneaked up on state and national leaders. In Oklahoma, meth and related drugs, including prescription stimulants, now play a role in more deaths than all opioids combined, including painkillers, heroin and fentanyl, according to the Centers for Disease Control and Prevention.

The spending package that lawmakers agreed on this week includes legislation from Senators Jeanne Shaheen, Democrat of New Hampshire, and Rob Portman, Republican of Ohio, that would allow states to address the resurgence of meth and cocaine by using some of the billions of dollars that Congress had appropriated to combat opioid addiction.

Meth use first ballooned in the United States from the 1990s into the early 2000s, when it was often made in small home labs with pseudoephedrine, the main ingredient in many drugstore cold medicines. But today’s meth, largely imported from Mexico, is far more potent.

“It’s way different from the meth people were using 20 years ago,” said Dr. Jason Beaman, the chairman of psychiatry and behavioral sciences at the Center for Health Sciences at Oklahoma State University. “It’s like they were drinking Mountain Dew and now they are injecting Red Bull.”

Nationally, since late last year, meth has turned up in more deaths than opioid painkillers like oxycodone and hydrocodone. In 14 of the 35 states that report overdose deaths to the federal government on a monthly basis, meth is also involved in more deaths than fentanyl, by far the most potent opioid.

Provisional data from the C.D.C. shows there were about 13,000 deaths involving meth nationwide in 2018, more than twice as many as in 2015. That is still far fewer than opioid deaths over all, which passed 47,000, but the pace is accelerating while opioid fatalities have flattened.

“This is the one thing that keeps me awake at night,” said Dr. Brett P. Giroir, assistant secretary for health at the Health and Human Services Department, at a conference on stimulant abuse on Monday. “Within a few short months, and you can model it any way you want, methamphetamines will be secondary to fentanyl nationwide associated with overdose deaths.”

Unlike with opioids, there is no way to reverse the effects of a meth overdose, just as there is no medication approved to treat meth addiction and the cravings it creates. For now, treatment for meth addiction consists largely of behavioral therapies with “a much more moderate effect size compared with medication,” said Dr. Nora Volkow, the director of the National Institute on Drug Abuse.

For many here in Oklahoma, what treatments do exist are out of reach. Most poor adults in the state do not qualify for Medicaid coverage that would help those with meth addiction gain access to treatment, because the state has chosen not to expand the program under the Affordable Care Act. And while Oklahoma has won a windfall of money — $ 355 million — from lawsuits against opioid manufacturers, much of it is specifically for fighting opioid addiction.

“We know there is funding coming in for the opioid problem,” said Mimi Tarrasch, the chief officer of Women in Recovery, an alternative sentencing program in Tulsa. “But what I see, and what our community continues to see, is really a lot of addiction to methamphetamine.”

Meth is still not considered nearly as deadly as heroin or synthetic fentanyl, the latter of which has killed tens of thousands of Americans over the past five years, often within minutes, by depressing their breathing. Instead, meth stimulates the central nervous system, causing agitation, sleeplessness, psychosis and gradual damage to the heart, brain and other organs.

“Basically your blood pressure goes up so high that you can rupture your aorta or have a stroke,” said Dr. Andrew Herring, an emergency medicine and addiction specialist in Oakland, Calif.

In many cases, opioids are contributing to meth deaths, as people use both types of drugs together. Opioids were found to play a role in about half of the deaths involving meth in 2017, the most recent year for which detailed toxicology results are available.

Some experts think the number is probably larger. Dr. Daniel Ciccarone, a professor at the University of California, San Francisco, who studies patterns of drug use, said he suspected some coroners and medical examiners were not checking the blood of overdose victims for dozens of fentanyl analogues, which have chemical structures similar to fentanyl but require specialized toxicology testing.

Meth-related deaths may also be rising simply because the number of users is rising, Dr. Ciccarone said, including those with underlying heart or other problems.

“It’s embarrassing that we don’t have the answer at our fingertips and we should,” Dr. Ciccarone said at the stimulant abuse conference.

Research suggests that in some cases, fear of dying from fentanyl is compelling people to use meth instead. Others are using meth as an upper to rouse themselves after using opioids, which have a sedative effect, or to help with opioid withdrawal. Still others are turning to meth for a high even as they take anti-craving medications to recover from opioid addiction.

Dr. Giroir said combining meth and fentanyl could be the most dangerous move of all, although researchers are still trying to figure out how the drugs work together.

“We definitely want to dissuade people from the notion that somehow a downer and an upper cancel each other out,” he said. “Early data suggests the combination is probably more deadly than the sum of its parts.”

Some deaths involving meth are due to the risky or violent behavior it can cause, not the drug itself. Rose and her 19-year-old boyfriend, stopping to talk to a reporter one morning on their way to a drop-in center where they hoped to shower, said they knew of a man who had hanged himself after a meth-fueled fight with his girlfriend.

Last year in Tulsa, a 25-year-old man with schizophrenia died after he shattered the glass door of a downtown bank while on meth and two police officers, who had been pursuing him, shot him with a Taser 27 times. His autopsy report said the likely cause of death was cardiac arrest “due to methamphetamine toxicity in the setting of physical exertion/restraint,” with cardiovascular disease as a contributing factor. The man’s relatives say excessive force by the police was to blame and are planning to sue, said Damario Solomon-Simmons, a lawyer for the family.

Read More:  How much is anxiety counseling

Many autopsies of Oklahoma residents whose deaths involved meth also found heart problems. In one typical case, a 48-year-old receptionist was found dead in a hotel room in May, her body withered to 77 pounds, her heart diseased. The cause of death was found to be acute methamphetamine toxicity.

Dr. Beaman, who sees patients at a psychiatric crisis center here in Tulsa, said psychosis and other mental conditions caused by meth use were taking up more and more resources. In June alone, he said, more than half of the admissions to the crisis center were related to meth.

“I can’t treat people with schizophrenia,” Dr. Beaman said, “because I’m spending all my time treating people who are using meth.”

Shayla Divelbiss, 29, of Glenpool, Okla., considers herself lucky to be in good health now after using meth for six years, during which she ignored a thyroid condition and went days at a time without sleep. After waiting two harrowing months for a bed at 12 & 12, a treatment center for the poor and uninsured, she was able to stop.

“All the responsibilities of being a human just went out the window,” she said of her time on meth. “I quit cooking and eating. I had real bad anxiety. I was skin and bones.”

Daniel Raymond, the director of policy at the national Harm Reduction Coalition, said it was imperative to figure out exactly how meth users were dying so that cities and states could build public health strategies based on that knowledge. For now, those strategies include warning users about the risks of “overamping,” a word used to describe using too much meth, and the best ways to address it, like cooling down, drinking water and sleeping. Syringe exchanges have an important role for those who inject meth, he said, just as they do for opioid users.

At 12 & 12, a former hotel on the outskirts of Tulsa, 64 percent of the clients are addicted to meth, said Bryan Day, the chief executive. State lawmakers have agreed to give the center more money next year to add beds for meth patients and increase their average stay, which is about 30 days. He estimated that 4,000 people in the state need treatment for meth addiction but are not receiving it.

“My belief is that their judgment for a period of time is very, very skewed, leading to frightening choices and decisions and impulses,” Mr. Day said. “The brain takes time to heal. We don’t want to shortchange this population.”